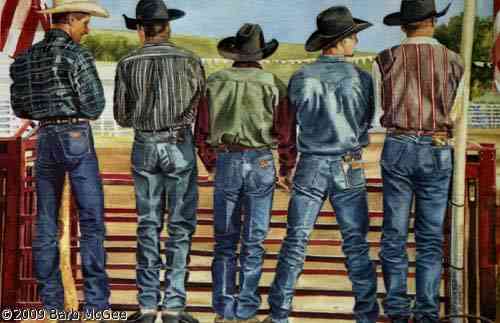 Cowboys Standing by the Bucking Chute

Years ago I got the idea for the painting “Body Language” from a photograph of two guys hanging on the fence. I thought, “that would make a great painting, but the artistic rule says, “you have to have an uneven number.” For several years I looked for the right composition but never found it. So,one day at the rodeo there was a group of young men hangin around waitin for the show to start. I decided to ask if they would stand in front of the fence so I could take some pictures, one of the guys said, “Sure we will, come on boys, lets do it.” Another one said, “You want to take a picture of what?” “Body Language” is the result of those photos.